Since early times, shepherds had a low reputation within society. It seemed as simple and unsophisticated work. Then, one announcement made by the angels near Bethlehem changed everything! Inside the caves overlooking Bethlehem, the shepherds watching over their sheep heard about the birth of Jesus before anyone else. Although the exact location is uncertain, archeologists agree that the announcement took place in Beit Sahour, near Bethlehem. Let’s pay a visit to this historic town to understand the relation between Jesus and Shepherd’s Field.

A JOURNEY IN THE SHEPHERD’S FIELD

The Palestinian town of Beit Sahour is to the east of Bethlehem, inhabited by around 14,000 people. Besides witnessing the Annunciation to the shepherds, Beit Sahour has been under the influence of various empires and nations, including the Ottoman Empire, Jordan and the Great Britain, because of its strategic location as the bridge between three continents.

THE ANNUNCIATION TO THE SHEPHERDS

According to the Christian tradition, The Annunciation to the Judean shepherds took place right outside Beit Sahour, Bethlehem. The second chapter of the Gospel of Luke has a detailed description of the miraculous incident. On the day of the Annunciation, a group of shepherds was babysitting their flocks on the farm grounds between Bethlehem and Beit Sahour. They were expectedly shocked by the appearance of the first angel, but he assured them that he had good news:

Today in the town of David a Savior has been born to you; he is the Messiah, the Lord. This will be a sign to you: You will find a baby wrapped in cloths and lying in a manger.

Later, more angels appeared to the already astounded shepherds to instruct them about what to do next. As described in Luke 2:14, the angels told them to find Jesus next to Mary and Joseph in Bethlehem. Adhering to the angel’s instructions, the shepherds traveled to Bethlehem to visit Jesus for the Adoration.

THE PORTRAYAL OF SHEPHERDS IN BIBLE

As magnificent as the Annunciation to the Shepherds was, it also sparked questions about why the shepherds heard it first, instead of all the powerful kings and nobles. Many scholars stated that shepherds were the outcasts, Lower social class and uneducated. The real question, though, was whether it reflects an accurate portrayal of the shepherds in the Old and the New Testaments.

In the Old Testament, we see clear descriptions of Abraham, Moses, and David as shepherds. Genesis 13 mentions the livestock and flocks of sheep owned by Abraham. Moses and David also spent a substantial part of their youth helping their fathers with the flocks, as described in Exodus 3:1 and Samuel 1:17 respectively.

More importantly, the Old Testament depicts God as a shepherd on many occasions, including the famous verse from Ps 23:1,

The lord is my Shepard;

Ezekiel 34:12 quotes God as follows: “As a shepherd looks for his sheep on the day he is among his scattered flock, so I will look for my flock. I will rescue them from all the places where they have been scattered on a cloudy and dark day”, which clearly indicates God’s mission to gather all the people under one roof.

In the New Testament, there are several connections between Jesus and shepherding. The most famous passage is John 10, where he describes himself as “the good shepherd”. Also, Matthew 2:6 foreshadows the motivation of Jesus as follows: “And you, Bethlehem, in the land of Judah, are by no means least among the leaders of Judah: because out of you will come a leader who will shepherd my people in Israel”. There are many other verses in the New Testament associating not only Jesus but also church leaders with the act of shepherding.

An alternative interpretation came in Magnificat, the Song of Mary, in which she stated, “He has brought down rulers from their thrones but has lifted up the humble.” (Luke 1:52). Even if the shepherds were at the bottom of the social ladder in early Jewish communities, the Annunciation was a substantial manifestation of shepherds (the humble ones) being glorified. 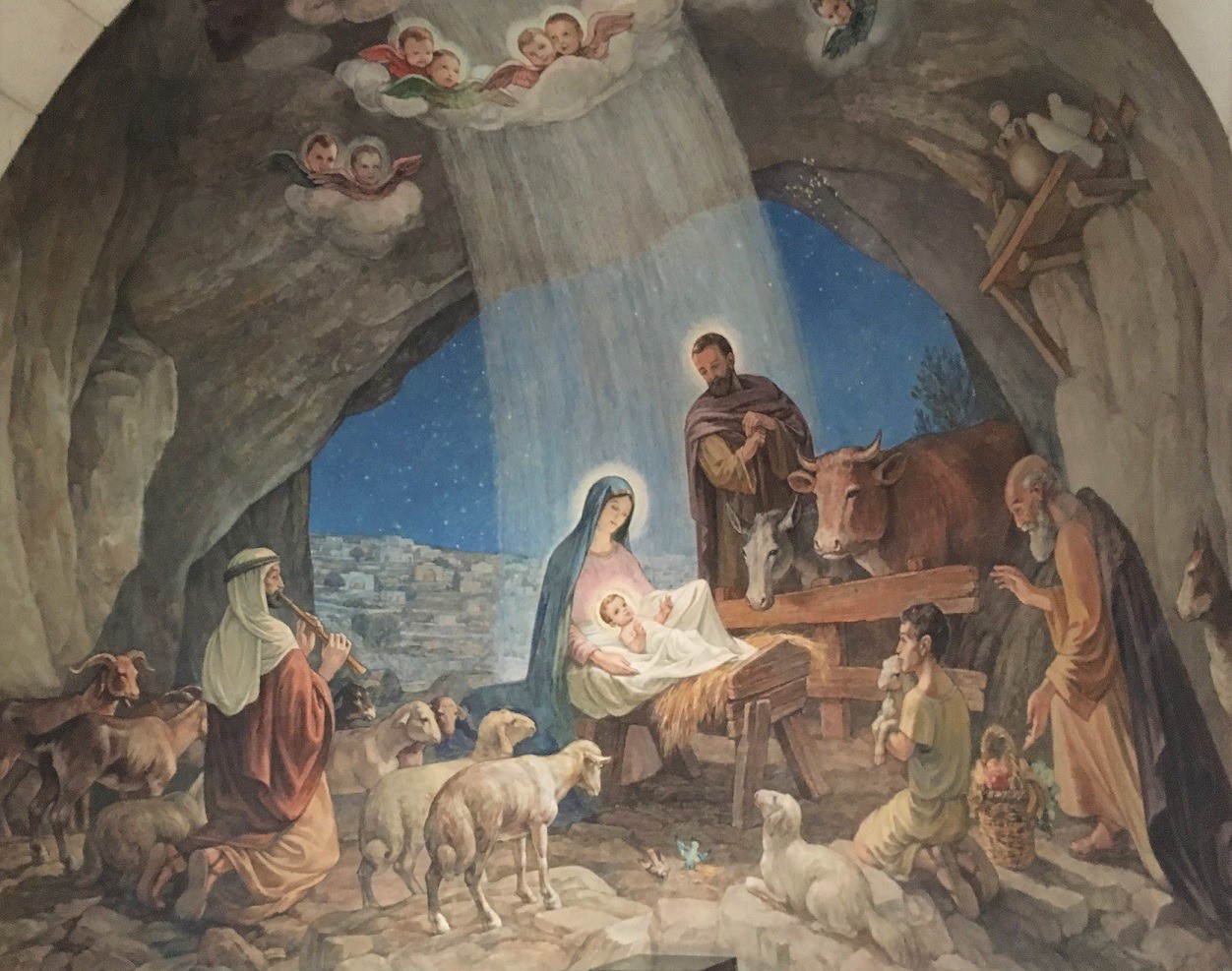 WHAT TO DO IN THE SHEPHERD’S FIELD

Because of the inevitable urbanization in the area, the actual fields where shepherds watched over their flocks no longer exist. Nevertheless, historians suggest three possible locations for the Annunciation:

The Greek Orthodox Site – Church of the Shepherds

Kaniset el-Ruat, also known as the Church of the Shepherds, is a Greek Orthodox church. The location of the church matches the Tower of Eder, where the shepherds watched over the sheep. This biblical tower was also mentioned in Genesis 35:21 as Jacob’s home after the death of his wife Rachel. It was described by the historian Eusebius as Migdal Eder, which translates to the tower of the flock. Indeed, excavations revealed remains of the tower near the Church of The Shepherds. There are also remains of the previous church built by St Helena, the mother of Constantine.

The Roman Catholic Chapel of Shepherd’s Field is another suggested site for the Annunciation. Although the first construction dates back to the fifth century, the design of the current chapel built in 1953 belongs to the architect Antonio Barluzzi. For the design of the chapel, Barluzzi tried to imitate the tents used by shepherds in the fields. It would also ensure that the sunlight got equally distributed inside the church at all times, just like the light that was shining upon all the shepherds on the day of the Annunciation. It is worth noting that the excavations in the 19th century revealed three tombs attributed to the three shepherds.

The red-domed chapel greets the visitors with a bronze statue of an angel at the entrance. Inside the chapel, you will find paintings depicting the announcement, as well as paintings and mosaics showing the shepherds’ initial visit to Bethlehem. There is also a small cave behind the church, which many pilgrims consider a sacred site and call the Shepherd’s Sanctuary. 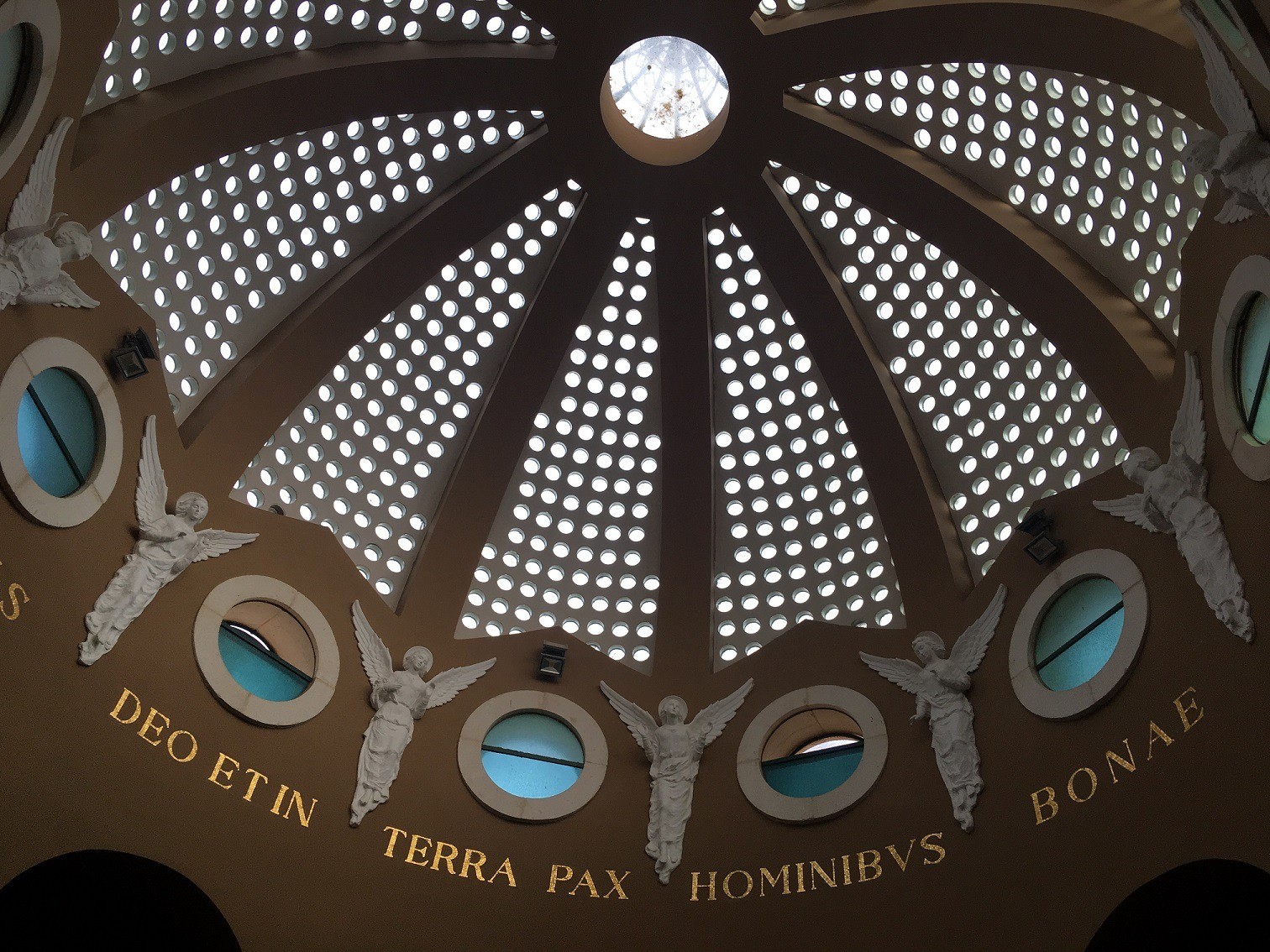 The Field Of Ruth

While you are in Beit Sahour, you can also pay a visit to the Field of Ruth just outside the east of the town, near Bethlehem. The vast plain expanding all the way to the Dead Sea is also known as the Field of Ruth and indirectly linked to the birth of Jesus.

Ruth was a Moabite woman mentioned in the Old Testament for her devotion to Naomi, her mother in law. After the death of her late husband from Moab, Naomi decided to return to Bethlehem, which she initially had to escape because of famine. Although she urged her stepdaughters to stay in Moab, Ruth insisted “Where you go, I will go; where you lodge, I will lodge; your people shall be my people, and your God my God . . . .” (The Book Of Ruth 1:16-17). Back in the fields outside Bethlehem, Ruth started to collect the grains left for the poor people. At the time, it was a Canaanite tradition to leave 10% of the harvest. During one of her visits to the fields, Ruth met a wealthy landowner called Boaz. Impressed by Ruth’s loyalty to Naomi, Boaz decided to marry her, which began a chain of events leading to King David, Joseph, and Jesus.

To the east of both sites, you will find the Protestant Shepherd’s field. There are no churches here; instead, there is a rehabilitation center called YMCA. However, the center is next to another great cave, where you can find remains of the pottery used by the shepherds.

Bonus: Other Activities Nearby

Find out what to do in Bethlehem and the area here: