The Annunciation Church in Nazareth

Not to be confused with the Greek Annunciation Church, the Roman Catholic Church of the Annunciation is one of the most unique churches in the Holy Land.

Located in Nazareth, this church stands over the site where the house of the Virgin Mary had once stood.

It is also the spot where the Archangel Gabriel appeared to her and announced the birth of our Lord Jesus Christ.

This event is known as the Annunciation, and it is the reason for the church’s name. 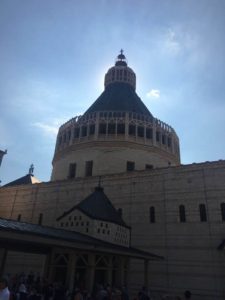 Additionally, this Basilica is also one of the biggest in the middle east and its magnificent towering cupola provide a magnificent sight.

A historically significant and sacred site to most of the Christian denominations, the church welcomes many visitors every year.

The earlier one comprising an altar inside a cave in which Mary had lived.

It was constructed in the 4th Century by Emperor Constantine the Great along with a larger structure atop the cave.

The larger structure was destroyed during the Muslim conquest of Palestine.

The second store is the Basilica itself which was constructed, in 1969.

It replaced yet another, much smaller church, which had stood there since 1620 after its intent demolition and reconstruction.

The famous Italian architect Giovani Muzio designed the new Basilica and many nations joined the effort.

Those fellow Christian nations have donated mosaics of Marian devotions, which are now presented in the gallery outside the church.

Church of the Annunciation Opening hours

We recommend you to visit the Church during Christmas time for the many ceremonies and masses that are held there during this time.

For more information check our article about what to do during Christmas time in Nazareth.