Church of Nativity in Bethlehem

The church of Nativity in Bethlehem is one of the most visited Churches in the Holy Land.

The Orthodox Basilica of the Nativity is located near the iconic manger square in the center of Bethlehem, Palestine.

The Church attracts tourists and pilgrims from all over the world, as it is built on the birthplace of Jesus Christ.

This small but significant cave, which is enveloped by the church is known as the grotto of the Nativity.

Also, the Basilica of the Nativity is the oldest major church in the Holy Land.

It is especially recommended to visit the church during Christmas Eve.

History of the Nativity church in Bethlehem

The church of the Nativity was commissioned in 327 by Constantine the Great and his mother Saint Helena.

The Church stands on the birthplace of our Lord Jesus Christ. 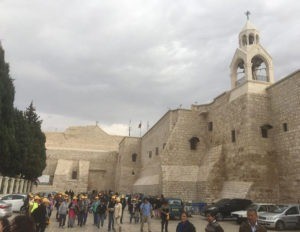 The Church of Nativity

The old Basilica was completed between 333 to 339 but was later destroyed by fire during the Samaritan revolts in the sixth century.

A new basilica was erected in 565 by the Byzantine emperor Justinian I.

He managed to restore the architectural tone of the original Basilica.

Over the year, the church went through numerous repairs, expansions, and addition.

Such notable additions include two bell towers from the Crusader period(now gone), wall mosaics and paintings.

In adjacent to the Greek Orthodox Basilica, you will also find an Apostolic Armenian church and the roman catholic church of St. Catherine.

The Church of the Nativity is a World Heritage site and was the first to be listed under Palestine by UNESCO.

The grotto is closed on Sunday morning.

Some of our best Holy Land Private tours actually include this church.

You can find more information about in the following page.

For Booking and information Call us: [insert_phone] or Leave us a Message and we will contact you back shortly.