In the land of Judea, on top of an isolated plateau overlooking the Dead Sea, stands the National Park and remnants of the ancient fortress of Masada.

This archaeological site includes a large complex of fortifications which were erected during the Hasmonean period.

Later, king Herod the Great extended the fort and built two palaces for himself on the Mountain.

Today, the National park of Masada is one of the Main attractions in the area of the Dead Sea.

In addition to the extraordinary view, it has a Heroic story to tell.

Historically, the only way to reach the fortress could be by a single pathway.

This path was too narrow for men to walk and it earned the name “Snake Path” for the way it zig-zags and twists all along the way to the top.

It is believed that Masada was the place where David rested after fleeing from his father-in-law, King Saul.

According to the Jewish-Roman historian Josephus Flavius, Herod the great had built the fortress of Masada between 37 and 31 BCE.

Herod furnished this fortress and based it as a refuge for himself.

The Siege of Masada

After the fall of Jerusalem and the destruction of the Temple (70 CE) by the Roman General Titus, a group of Zealot Jewish families fled from Jerusalem and took refuge in the Fort.

After the Rebellion was crushed, the new governor of Palestine, Lucilius Bassus, was assigned with the task of “mopping-up” the last pockets of Jewish Resistance.

Those last strongholds were Herodium, Machaerus, and Massada.

He did not live to complete his task due to illness and was replaced by the Roman General Lucius Flavius Silva.

Then, Silva moved against the Last Jewish stronghold at Massada, massing a force of 4,800 Auxiliary Soldiers and Jewish Slaves which were captured earlier in the rebellion.

The Jewish Defenders in Masada consisted of a small force of less than a thousand Jewish Sicarii Force(which also included non-combatants such as Women and Children).

The Romans had camped in the Mount of Olives and demanded the defenders to surrender, but after those were rejected, he began his move against the fort.

When the Romans finally breached the walls after a year, they discovered a scene:

All of the surviving remaining Jewish defenders had chosen death in a mass suicide.

The Jewish-Roman Historian Josephus Flavius described the fort of Masada has as “a lozenge-shaped table-mountain” that is “lofty, isolated, and to all appearance impregnable”.

This fact was probably one of the main explanations of how a small group of rebels managed to hold the fort for over a year against the unstoppable and overwhelming Roman Legion.

Highlights of the Masada National Park

When visiting masada, in order to reach the top of the fort, there are two available ways: using the convenient Cable car or taking the famous Snake Path on foot.

Although most people choose to take the Cable car, we recommend more adventurer visitors to walk the snake path(at least downwards).

Thus, you will be truly able to experience what the ancient Jews experienced when walking and living there.

It usually takes between 1 hour to 1.5 hours to complete the hike upwards and 40 minutes downwards(which is a lot easier of course then going upwards).

After reaching the top you will be able to stroll through the ruins of the fort.

There, you will be able to discover the remnants of the ancient forts, rooms, wells, synagogue and even a small Byzantine monastery which had served as a place of solitude for monks during later periods.

The most notable scene which you can experience is available if you reach the top of Masada before sunrise.

There are no better words to describe what you can see in Masada than just showing you what it looks like: 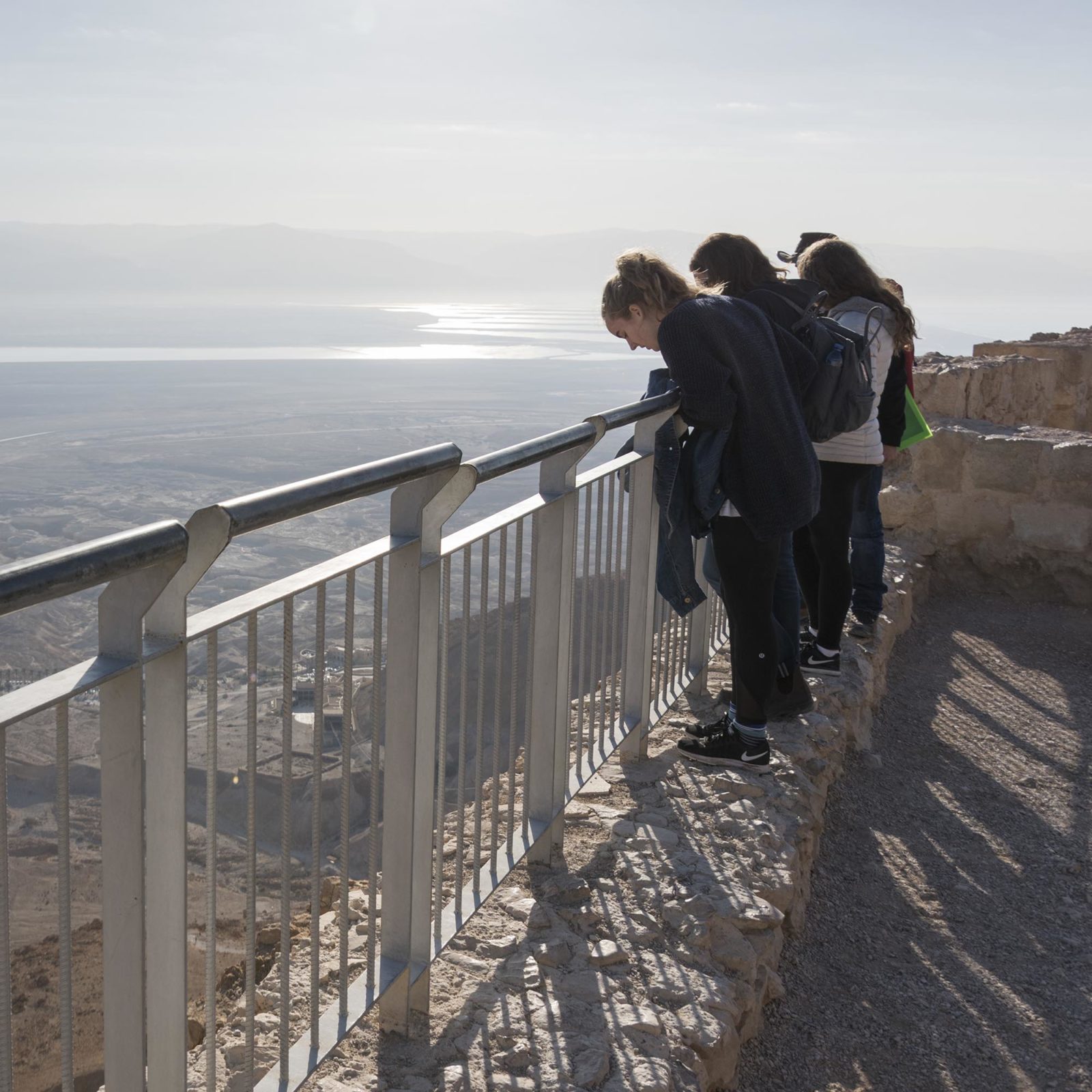 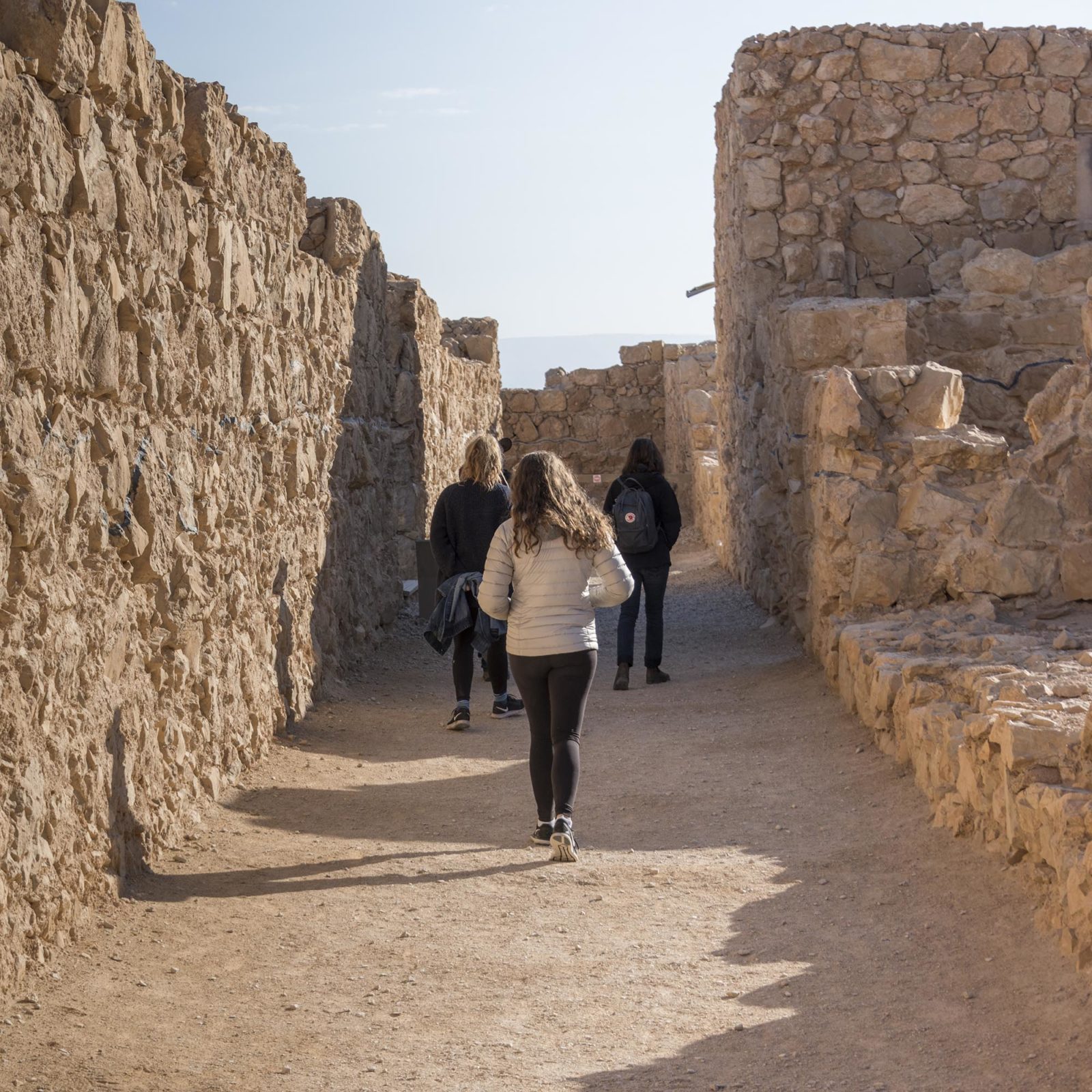 My sister and I wanted a private guided tour with a Christian guide and we were so grateful to have spent 5 days touring with Daniel. He made our time in Israel very special with his VIP service all the way…