The Wedding Church at Cana is one of the most unique churches in the Holy Land.

The whole church is dedicated to wedding ceremonies.

This is an unforgettable and spiritual experience that you will never forget.

It is located in the central part of the town of Kafr Kanna(Cana) in northern Israel. 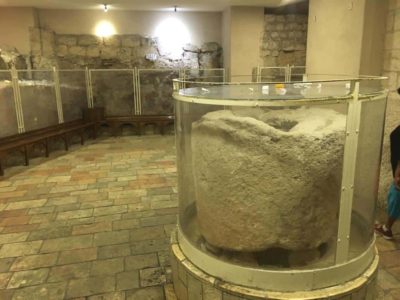 The Water was turned into Wine in this Rock

This Roman Catholic church, built by the Franciscan order in 1881, was built to commemorate a miracle of our Lord Jesus Christ as depicted in the Gospel of John(John 2:3-10).

According to the scripts, when the host of a wedding runs out of wine, his servants fill vessels with water at Jesus’ command.

Then, a sample was drawn out and taken to the banquet master.

He declares it as the best wine of the banquet.

This event is very important for Christians as it is one of the first miracles our Lord performed.

Archaeological excavations suggest that a Jewish synagogue had once stood at the site of the current church.

The remains of the synagogue suggest it existed in the 4th and 5th centuries.

At the site, one of the church’s most remarkable features you should pay attention to is the mosaic floor.

The floor is one of the remains of the earlier synagogue.

Additionally, archaeologists have discovered remains of tombs which dates to the times of the Byzantines in the fifth and sixth centuries.

The Wedding church in Cana is a very interesting place to visit during a Holy Land Tour.