Petra’s caves, temples, and tombs do an excellent job revealing the impressive civilization of the great city. Petra’s raw beauty is one of the main reasons it is considered the “Rose City.” The Jordan’s City of Stone is a honeycomb of hand-hewn caves, temples, and tombs. These are carved from the blushing pink natural sandstone about 2,000 years ago.

These astonishing structures, hidden by time and the shifting sand in the region, help Petra tell stories of its lost civilization. Even after so many discoveries have been made, new ones still pop up reminding us that we can still learn about the Nabateans. This is a nomadic desert group of people whose kingdom rose from the cliffs and peaks of the rejoin. These people also had incredible wealth, which grew from incense trade.

The History of The Civilization in Petra

Raqmu or Petra (the name with which Greeks called the region) grew and became the Nabatean’s most prominent city. It functioned as a linking camel canvas between the Arabian Seas and the Mediterranean. It extended its reach from Egypt to Syria and down to Greece. Thanks to a natural phenomenon that allowed the Nabateans to use Petra to control water resources and an almost magical ability to disappear into the rocks, the Nabateans remained unconquered for several decades.

In 63 B.C., the Romans arrived Petra, which signaled a new decade of massive expansion and grandiose constructions. One proof of this is the theater that sat over 6,000 spectators and other impressive facades you will find in Petra.

The Monastery and Treasury were both carved into the rock face and had certain Hellenistic features. They also have ornate Corinthian columns, bas relief amazons, and fanciful acroteria. Knowing that these structural architectures were built by carving from the top to the bottom makes it even more eloquent.

Petra’s engineering phenomena include a sophisticated water system that was believed to support about 30,000 citizens. This water system was carved into the twisted passageway of the sig. The irrigation channel drops 12 feet over a mile. The water system also had underground cisterns that stored runoffs, which were used during the dryer times of the year.

With all this wealth of rich history, the most profound and attractive part of Petra is yet to be discovered. This refers to the entire city of ruins, which is a beautiful work of art that has been painted on a natural stone backdrop, which changes color every hour; the elegant Silk Tomb swirls with streaks of blue, red, and other. On the floor of the Byzantine era church, we also see a vivid mosaic.

Petra encountered Christianity in the third and fourth centuries, and Christianity flourished during this period. However, the city waned after an earthquake in 336 A.D. and after it fell under the early Islamic dynasties of the 7th century.

A Swiss explorer Johann Burckhardt rediscovered Petra in 1812, and more of the secrets of the city was unfolded. Currently, archeologists have still discovered less than half of the sprawling site. In 2016, a monumental discovery was made. Thanks to the benefits of satellite imaging, another structure was found buried in the sand.

It’s no wonder that Petra remains one of Jordan’s top tourist sites as well as a revered site of the World Heritage.

Places to visit in Petra

Petra is open to tourists all year round so that you can choose their preferred weather conditions for a visit. Stretching out in a line from Wadi Musa’s town, visitors enter the park and can then trail into Siq, which is the legendary canyon on which tourists get a view of the treasury. As tourists continue onward, they come across the Royal Tombs and Roman ruins. If you aren’t exhausted yet, you can walk further onto the Monastery, which is another site that rivals the treasury in its splendor.  While on your journey, there are several side attractions, camel, and donkey ride that you could embark on if you desire.

This is a gorge that was formed when tectonic forces broke the mountain into two pieces. Walking through the two parts of the mountain is a delight. Its snaking path and rock walls, which tower high above, make this experience all the more thrilling. 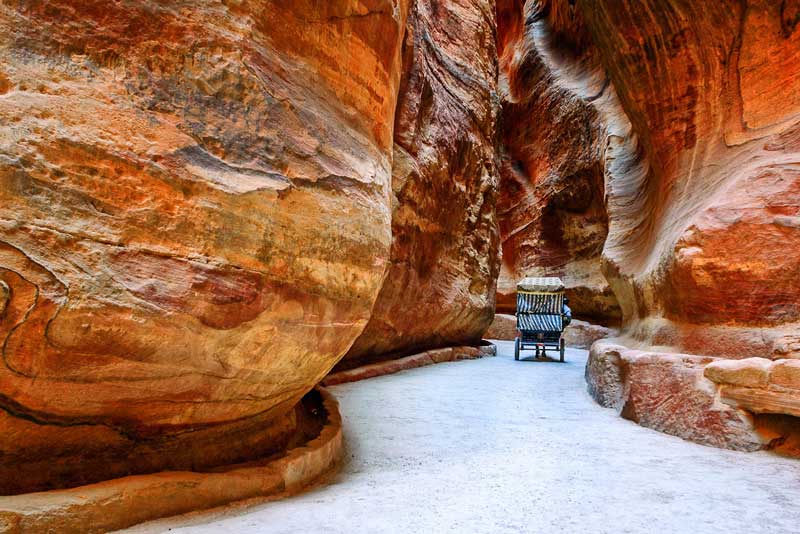 Bab As-Siq is a great place to visit while in Petra. It is the starting point of your journey, and on its trail, there are tombs and monuments to see along the way. One of such tombs is the Obelisk Tomb. 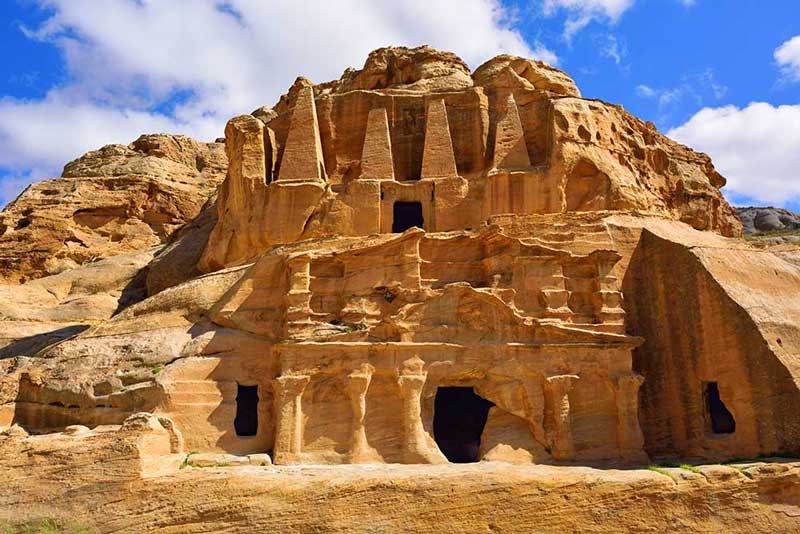 The treasury view is one of the reasons so many visit Petra. This architectural marvel is completely carved out of the sandstone mountain. The treasury was built to serve as the tomb of King Aretas III, who was once a Nabataean king.

The street of facades

The facades’ street is an open area where Nabateans built houses and tombs into the sandstone mountains about 2000 years ago. 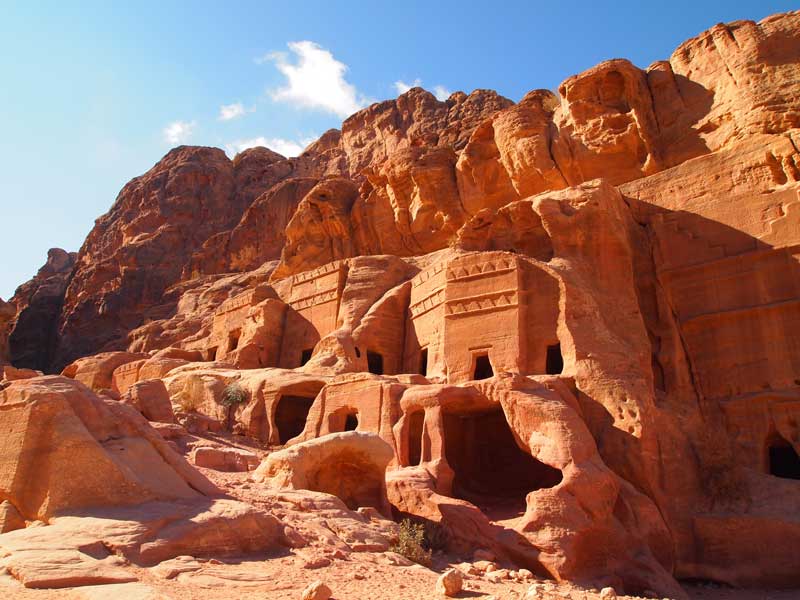 This is a series of facades carved from the sandstone mountains, which serve as the Nabataean royalties’ tombs. 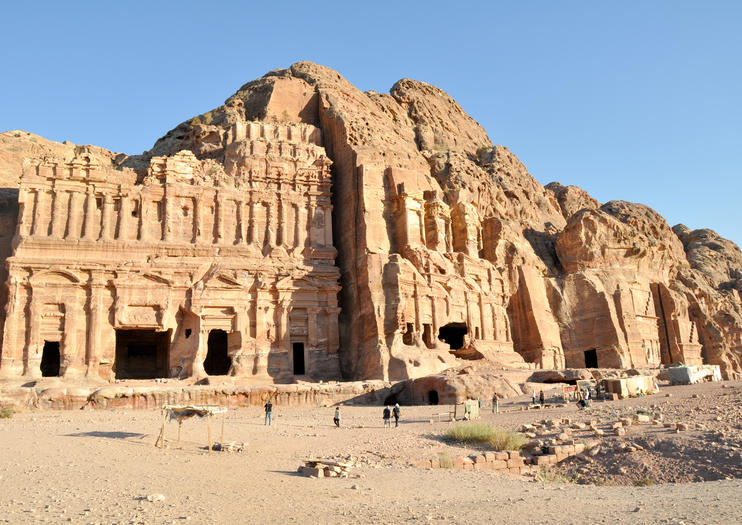 This is the remains of the Roman era. As master builders, the Romans constructed roads that remain. 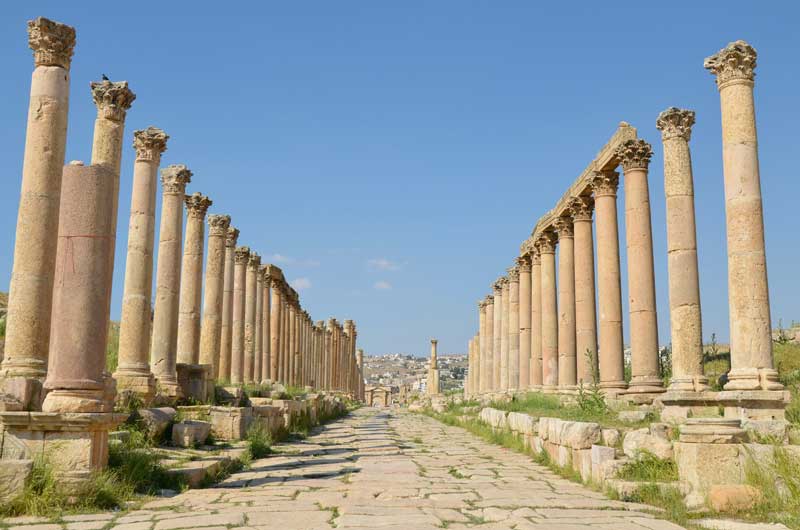 The Nabataean temple was built in 100 BC, and it is also the largest freestanding building in Petra.

There are many places to visit or activities to undertake while in Petra. We can book your tour to the city from across America. Our services ensure that you enjoy a delightful trip and a sublime experience while in the beautiful city of Petra.