Mount Nebo lies in the Hashemite Kingdom of Jordan. It is an important mountain for Christians around the world. According to the Pentateuch section of the Holy Scripture, it was mentioned that Moses stood and saw the Promise Land from this Mount. This was because God had punished him that he wouldn’t step foot into the Promised Land.

Mount Nebo is about 1,000 meters tall and is 10km north-west from Madaba. Pilgrims and religious travelers love to climb this mountain and, like Moses, withness the breathtaking panorama of the Promise Land. When the conditions are favorable, you can see Jericho and even Jerusalem.

The Religious Significance of Mount Nebo

According to Deuteronomy chapter 34, Moses climbed Mount Nebo to view the Promis land (Canaan). It is also believed that Moses spent his last days on this mountain before his death.

According to the holy book, Moses died on Mount Nebo at the age of 120 and is believed to have been buried in Wadi Mujib. However, the exact location of his burial site is still unknown. Nevertheless, there is a grave of Moses located at Maqam El-Nabi Musa. Scholars continue to debate whether the mountain we currently know as Nebo is the same Mount referred to in Deuteronomy.

There are two peaks on Mt. Nebo, Al-Mukhayyat, and Siyagha. By the 4th century AD, Mount Nebo had attained the status of a pilgrim site. A church and Sanctuary were also built on Shiyagha in honor of Moses. Monks in the 6th century AD constructed a Byzantine monastery also on Siyagha, which stood for almost six centuries. The site was, however, abandoned in the 16th century.

Mount Nebo was later on purchased by the Franciscans in 1993, and they restored the site, which became a Franciscan Monastery. This monastery is open to pilgrims today who wish to visit. 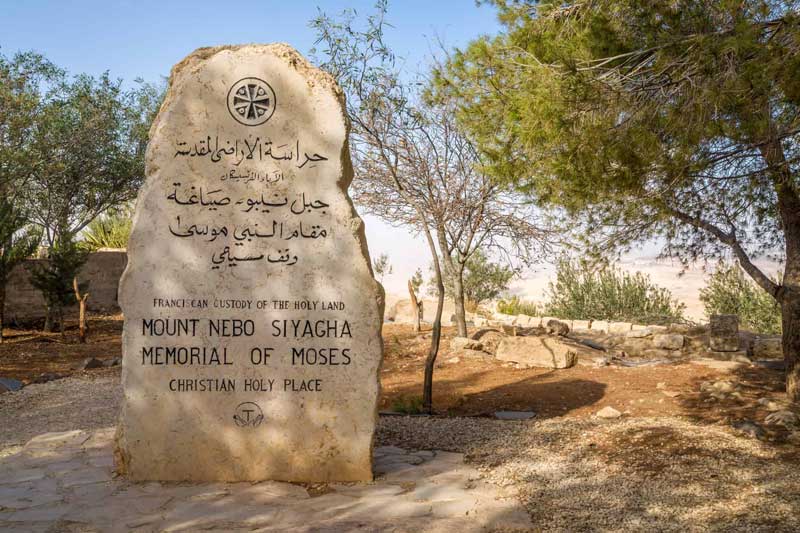 Mount Nebo is treasured for the bewildering panoramic view of areas of the Dead Sea, parts of the West bank, river Jordan and Jerusalem. Upon visiting Mount Nebo, you will be able to see well-preserved mosaics. These extraordinary pieces of art were uncovered from archeological digs that date back to the 6th century.

The Mosaic depicts the process of winemaking. It also features images of pastoral and hunting scenes as well as life-like images of savanna wildlife such as a zebra and an ostrich. You will also find a sculpture of the Serpentine cross called the Brazen Serpent. It is a symbolic representation of the bronze serpent made by Moses in the court of Pharaoh. The cross also represents the cross of Jesus Christ.

Today, visitors to Mount Nebo in Jordan can look out from the summit viewpoint (Pisgah), which is near the Brazen Serpent. From this point, you can view Syagha, which is west of the old Roman town of Madaba. Visitors also have a breathtaking view westwards across the Dead Sea and beyond as they catch a glimpse of Jerusalem and Bethlehem.

Visitors can also enter the church of Mount Nebo. This Sanctuary was built on the remains of a series of early 4-7th century AD Christian churches. This also includes the Byzantine monastery. These structures were erected to commemorate the passing and burial of Moses. Inside the church, you will find the beautifully preserved Mosaic from the old baptistery dating from 531AD.

Ayun Mesa, also known as the spring of Moses, is another wonderful sight that is surrounded by eucalyptus trees. This is a site of two 6th century churches that were destroyed by an earthquake in 749AD. These churches also had their pavements designed with beautiful Mosaic.

How to get to Mount Nebo

Mount Nebo should be included in your Jordan itinerary. No matter your plans, it is quite easy to get to Mount Nebo from any direction. The only downside is that you may need to have a vehicle for convenience, especially because public transportation to mount Nebo may be suspended.

The easiest way to get to Mount Nebo is by car from Madaba. From Madaba, we follow the Palestine street which leads into Al-Quds, and then Mount Nebo. From the south on the King’s Highway or in the north from Amman, road 35 to Madaba offers the best option.

Upon visiting Mount Nebo, there are several quality lodgings you could stay in before and after your visit. Accommodations are important because visiting mount Nebo will take approximately an hour, so it’s important to have a place to rest your head.

Mount Nebo is indeed a great place for Christians around the world to see. Its importance transcends its religious aesthetics, but it is also complemented by an excellent view of its surrounding. These two factors combined make Mount Nebo not only spiritually edifying but physically and mentally satisfying.

Our services are top class, and we plan tours to provide the best experiences. Book your tour today and pay Mount Nebo a visit.